King Erenius Greymoore was the first ruler of The Heartlands in Lairroth. He and his younger brother founded the city of King’s Port and he has been regaled as the most formidable White Knight to have ever lived. Both were known to have descended from a bloodline of legendary power and influence.

Aside from his younger brother, his closest advisers were the three great wizards Thalomere, Nadrak, and Rhoum.

Stories claim that King Greymoore was slain centuries ago at the hand of the mighty vampire known as Sinistra D’le Coeur. The only known surviving heir of the Greymoore line is King Aleric Falconcrest, though it is unknown if he is a descendant of King Erenius or a descendant of his younger brother.

The symbol of the Greymoore family is the eight-pointed star. The eight points of the star represent the domains/realms over which the Greymoore Bloodline claims the right to rule:

North, South, East, West, Above, Below, The Past, The Future– with the intersecting heart of the star representing the here and now.

As a point of historic interest, it is believed that the Symbol of Chaos (pictured below) was created in rebellion to the rule of the Greymoore Bloodline, and was thus designed as a direct response to the heraldic crest of House Greymoore. 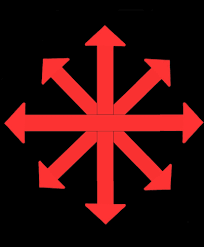